Have the Men had Enough? 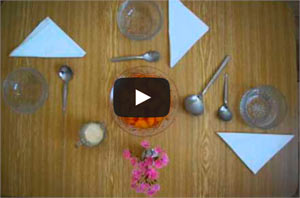 Have The Men Had Enough? This phrase, I heard often in my early childhood, which was in the era of post war rationing.

Shown originally as an Interactive Installation. The set comprised of a dining table complete with four distinctly placed family chairs dating from the 1950/60s.

My audience would choose which particular chair to sit upon at the table. This film was projected from the ceiling, down onto a white tablecloth which covered the table. Frame by frame, the cycle of eating together as a family was revealed, from the very beginnings to the end.

The participants found that this interaction with this work, evoked distant generational memories of their own family experiences; and often triggering a unique but an emotional response. 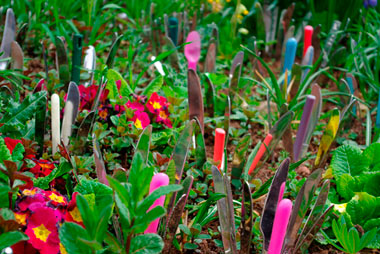 "Runcible" (with apologies to Lear) is a "found object" art installation comprising cutlery from the past 150 years collected obsessionally over a twelve month period from charity and recycling shops. Signalling the modern era of bourgeois domestic dining etiquette, from its Victorian inception through to the contemporary, "Runcible" invites the spectator to collapse the boundaries between food production and consumption on the one hand and, on the other, to imagine the cultural and social changes in the art of eating since the mid nineteenth century. On the design level it reminds us that cutlery as a designed artefact has its own artistic history as much as does the landscape in which it is here "planted". 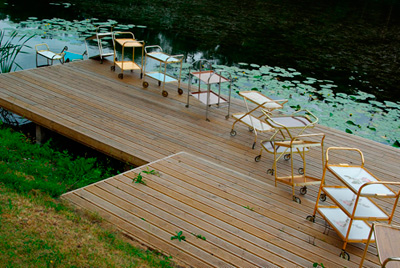 "Trolley" is a contemporary sculpture of "found objects", informed by feminist art practice.

Gathered obsessionally over a twelve-month period from charity and recycling shops, "Trolley" reflects changing domestic etiquette alerting the viewer to shifting social and gender patterns since the Second World War.

'Seeking Pearls' is an interactive installation using domestic materials and found furniture of the 1950/60s. It is intended to evoke in the audience the sense of these decades, and their all important memories of childhood within the domestic environment.

My work is very much about the process of gathering and preparing the materials before creating the piece. Over many months, I scoured charity and recycling shops all over the country to collect buttons - hundreds and thousands of them. Many came to me as collections in themselves, precious buttons kept and hoarded in families over generations.

It is these very buttons, together with reels of cotton threads, that were then 'bottled' into glass jars, preserving pots and large sweet jars and stacked onto wooden shelves. It is a story of the home, evoking all the traditional female roles within the domestic sphere. The shelving mimics either a pantry or a sweet shop, a three-sided space which works both as a display case or the 'walls' of a kitchen: a stage on which the viewer becomes a performer at the prepared table. The table is set to invite the viewer to participate; to follow my recipe of interaction; an engagement within the work and its meanings. It is these meanings which are open to each participant to explore and recall their own unique experiences and memories.

The title of this haptic sculpture was inspired by my own experience of an education set in the1950s. As girls we were prepared for the duties of wife and mother and the collective aspiration was, at that time, to await a string of pearls which was given by parents, or even better still, by your husband, for your 21st birthday.